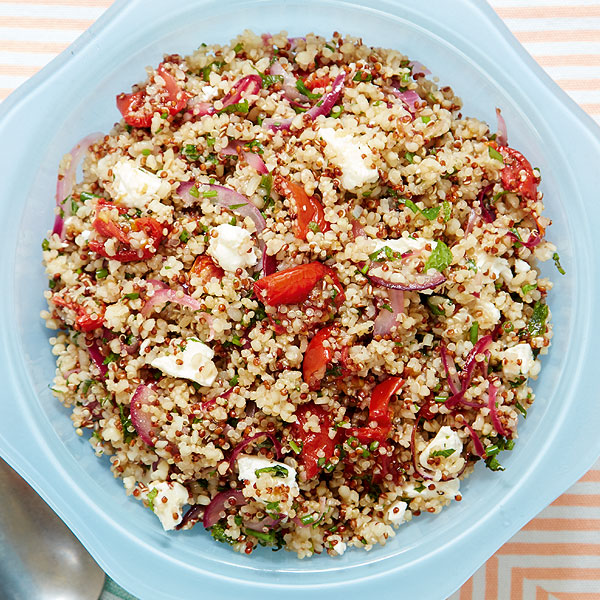 HERBED QUINOA AND BULGAR WHEAT SALAD WITH LEMON AND POMEGRANATE

HERBED QUINOA AND BULGAR WHEAT SALAD WITH LEMON AND POMEGRANATE

I love the combination of bulgar wheat and quinoa – especially red quinoa with its russet colour – so it’s great that you can now buy it in a mixed packet. Delicious with the fresh herbs and sun-blushed tomatoes stirred in. The pomegranate seeds aren’t essential, but they add a lovely burst of freshness that complements the other ingredients. Serve as a side dish or as a salad for lunch.

PREPARE AHEAD - Can be assembled up to 8 hours ahead – pour on the dressing up to 2 hours before serving.


MARY’S EVERYDAY TIPS - Replace with 150g (5oz) each of bulgar wheat and quinoa if buying in separate packets.

A traditional ingredient in Middle Eastern cuisine, pomegranate syrup or molasses comes in a bottle and is available from most big supermarkets. It has a slightly sweet and sour taste that’s perfect for dressings and sauces. If you are unable to find it, however, you could use pomegranate juice instead. The flavour is not as intense, but you could pop it in a saucepan and boil it until reduced to a thicker, syrupy consistency.

This recipe is taken from: Mary Berry Everyday